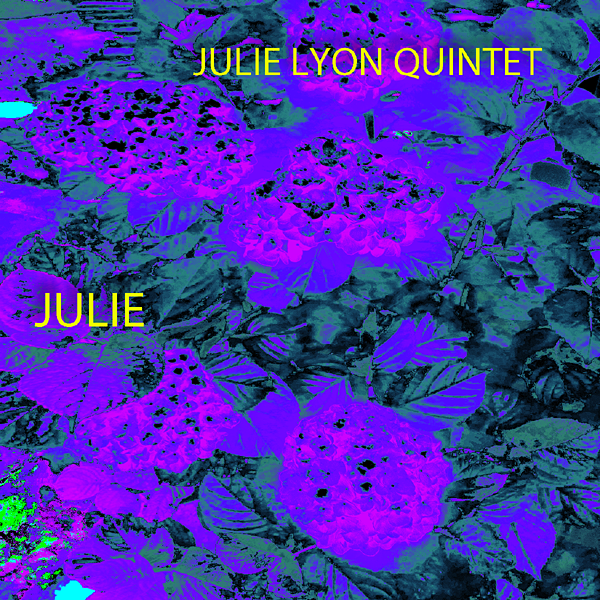 
Julie Lyon is an extraordinary singer. Julie is a wonderful album. Initially fronting the premier jazz quartet in Orlando, Florida, Ms. Lyon and her drummer/husband/partner Tom Cabrera pulled up stakes, settled in the New York metropolitan area and assembled a quintet of remarkable musicians for their Unseen Rain Records release.

And Julie is an extraordinary jazz singer. Classically trained and reared on pop, rock and blues, the draw of the vocal jazz greats, Sarah Vaughan, Nat King Cole, Ella Fitzgerald and others, opened the door to a world in which Ms. Lyon is now at the top of her game. On Julie, whether it’s the robust swing of Dr. Lonnie Smith’s “Too Damn Hot” (lyrics by Julie Lyon), the deeply felt “Every Time We Say Goodbye” or the Parisian cafe as speakeasy atmosphere of Tom Wait’s “Temptation”, Julie’s voice is glorious and the band is in full flight.

Tom Cabrera’s Unseen Rain recordings include the trios Lion Hearted (UR9980) and the forthcoming Sumari (UR9962), and his duo with the quintet’s guitarist Jack DeSalvo have released several albums, among them are Tales of Coming Home (UR9986) and Libra Moon (UR9978). In addition to being an incomparable jazz drummer, Cabrera is an adept world percussionist, often adding to the proceedings instruments from all over the planet, particularly the middle-east.

About Jack DeSalvo, Cadence Magazine says, “Using both acoustic and electric instruments, DeSalvo demonstrates technique, intelligence and imagination with a broad streak of lyricism and passion in what amounts to one of the better guitar voices to be heard in improvised music these days.” He also plays mandola on “Temptation”, a stringed instrument like the mandolin, though pitched a bit lower.

The inimitable multi-instrumentalist Matt Lavelle plays both trumpet and alto clarinet on Julie with a bluesy, lyrical bent that echoes the jazz trumpeters of decades past while retaining his very modern edge. Allaboutjazz.com say this about Matt, “…Lavelle travels the line between life and death. His playing is absolutely fearless, and his ability to express himself unparalleled…”

At home in a variety of genres, the rich tone of Bobby Brennan’s double-bass anchors the quintet with solid swing and joie de vivre. Bobby is in demand from sea to shining sea, particularly New York City, Long Island, Nashville, and Orlando.